If someone offered you a magical substance, claiming guaranteed results for lengthened quality of life, a 50-percent decrease in risk of heart disease, a dramatic improvement in oxygen delivery to body muscle cells, decreased mental anxiety and depression, and lowered blood pressure and cholesterol levels would you, first of all, believe that such a potion really exists? And, if medical evidence supporting these claims could be provided, would you be willing to sacrifice time and effort to obtain this health-saving nostrum?

Such a potion does exist, and although time and effort are involved, it can be obtained very inexpensively. Exercise–aerobic exercise, in particular–such as brisk walking, jogging, swimming, bicycling, and aerobic dance is the “wonder drug.” And the spectacular benefits are available to all who use the “potion” three to five times per week.

However, the use of this “drug” has been associated with many potential side-effects, especially when too much is taken. Pain in muscles, joints, and tendons is a real possibility. Use during hot and humid weather can be risky. Large doses during pregnancy may harm the growing fetus. And, for those who have a high risk of heart disease, use of this substance can imperil life itself.

You’ve probably read the newspaper reports about exercise author Jim Fixx and basketball player Pete Maravich, who died of heart attacks during exercise. Countless other media reports have emphasized the injury woes of top athletes, the potential for heat exhaustion and collapse by runners during competitive races, and other ill effects associated with exercise. Many Americans, especially the millions who have joined the exercise movement, have become confused by such reports and are searching for answers.

Medical science has carefully weighed both the benefits and risks of exercise to provide answers to most of the questions asked by the exercising public. We’ll update you on many of the findings–about the connection between exercise and such concerns as cancer, aging, reproduction, and the musculoskeletal system.

These findings overwhelmingly support an important underlying principle. The benefits of exercise far outweigh the risks when moderate programs are engaged in regularly by adults. However–and this is something exercise proponents often neglect to mention–with increasing amounts and intensity of exercise, the risks expand exponentially.

The bottom line? When you engage in daily moderate aerobic exercise, such as brisk walking for 30 to 45 minutes, you will realize many more benefits than risks. However, if you undertake an aerobic exercise program that is excessive in amount (usually more than 45 minutes) and intensity (for example, very hard running or aerobic dance), the risk potential escalates sharply.

The chart in this article assesses the benefits and risks for 12 areas of health and disease. With each statement of benefit or risk listed, you’ll find a rating that estimates how strongly or weakly medical evidence supports that statement. Here is the story behind the numbers in each area.

Heart disease and risk factors. Regular aerobic exercise has been found to be very important in helping people to control their blood pressure and blood lipid (fat) profiles. There is even evidence to suggest that smokers who start exercising may have an easier time leaving off their cigarettes. The Centers of Disease Control in Atlanta, Georgia, recently surveyed all of the medical literature that examined the relationship between exercise and heart disease. They concluded that compared to active people, the risk of heart disease is doubled for those who are inactive. In fact, regular aerobic exercise was found to be just as important as smoking cessation, high blood pressure control, and blood lipid management in preventing heart disease. However, for people who have a high risk of heart disease, vigorous aerobic exercise has been found to promote sudden death from heart attack during the exercise bout.

So what is the practical advice in light of this information? People who smoke, have high blood pressure, high blood cholesterol levels, and/or who have parents or siblings who died before age 50 from heart disease, should have a thorough checkup before starting a program. If the physician gives approval, a moderate exercise program, such as brisk walking, is safer than other more vigorous forms, like running.

Obesity. Contrary to what many people think, exercise is actually less important than diet in both preventing and treating obesity. Most studies show that while aerobic exercise improves the overall health of an individual, change in dietary habits, especially reduction in dietary fat intake, provides the real power in the battle of the bulge.

Exercise affects the basal metabolic rate very little after the session is over. In fact, after a two-mile jog, only 10 to 15 extra calories are expended during recovery (which takes about 30 minutes). And, despite what you may have heard, regular training does not decrease the appetite. Although you may feel like eating less immediately after exercise, as the weeks pass by, active people tend to eat slightly more, not less, than inactive people.

There is a small risk that obese people may injure themselves because of the excessive strain on their muscles and joints. For this reason, “non-weight bearing” exercises, such as bicycling or swimming, are recommended for overweight people.

Psychological. Evidence shows that people who engage in regular aerobic exercise have increased feelings of vigor and improved self-concept, with lowered feelings of anxiety and depression. There is some research to suggest that one’s ability to think and reason is improved during, and immediately following, exercise, but this is probably short-term.

However, there is little, if any, evidence to support the contention that sleep is improved when people begin an exercise program. Neither is there evidence that people with substance-abuse problems can more easily conquer their habits through exercise.

Some people can develop what has been called “exercise addiction” by working out excessively. Despite feelings of chronic fatigue and associated problems in performance at work or in social relationships with friends and family, such individuals continue to persist in their exorbitant program of exercise. 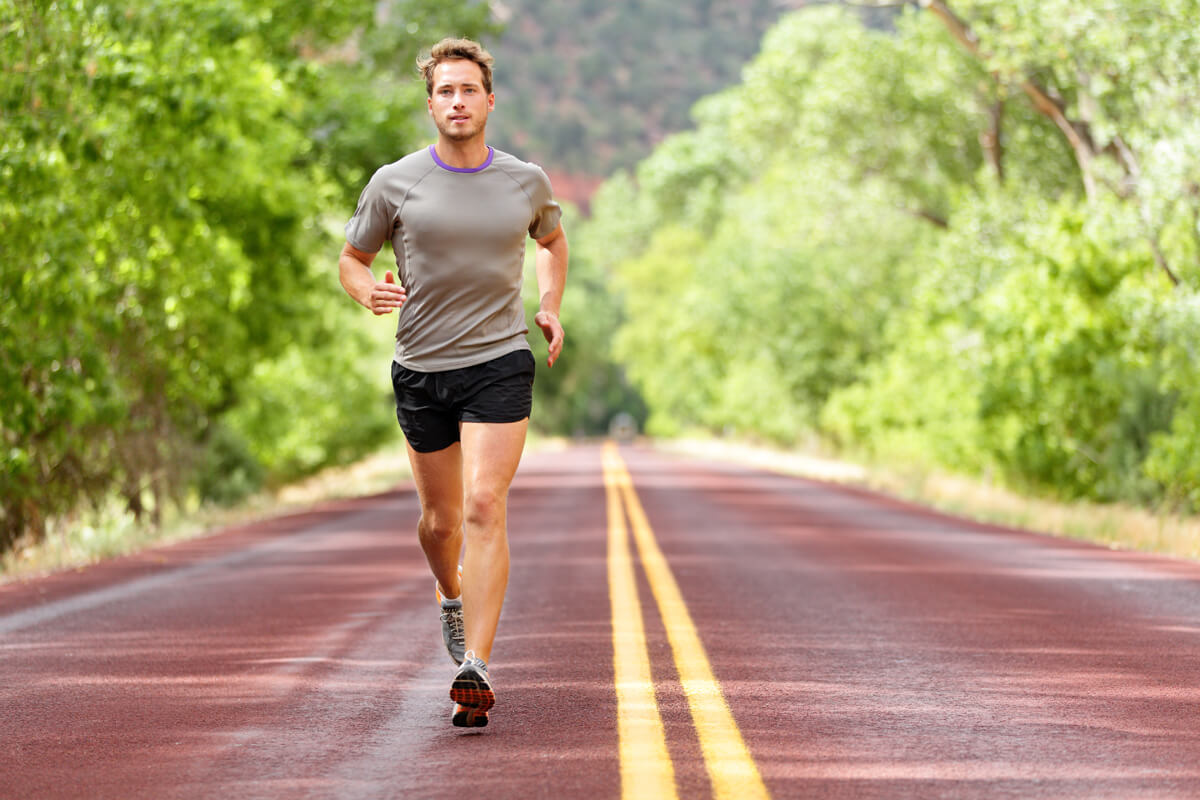 Musculoskeletal. One of the chief risks associated with excessive exercise is injury of the joints, ligaments, tendons, and muscles of the feet and legs. Most studies show that activities that require jumping and running, such as aerobic dance and jogging, promote the most injury.

Moderate exercise can improve the health of bones, however, increasing the amount of mineral content. The amount of minerals in the spinal bones usually decreases as one gets older, but regular exercise has been shown to help slow this loss. A few studies suggest that elderly women who have osteoporosis (very low bone mineral content leading to fractures) can partially reverse this problem by adopting a regular exercise program.

Younger women who exercise excessively, however, tend to lose their menstrual periods, leading to a decrease of bone mineral content. Dr. Barbara Drinkwater of Seattle has reported that the bone mineral content of 25-year-old women runners who had lost their periods was equal that of women twice their age. Many sports medicine doctors recommend that women ease back on exercise, until their menstrual period returns to normal, to protect their mineral bone content.

Nutrition. Do people who start exercise programs also tend to make improvements in their diets? There is little or no evidence to support this common belief. Does regular exercise increase the need for vitamins and minerals above what can be obtained from the diet? Once again, there is little support for this sentiment. Iron, however, is an exception to this rule. In some athletes, those who exercise vigorously for long periods of time, a mild iron deficiency can develop, and upon the advice of a physician, a mild iron supplement may be needed.

Diabetes. Diabetics who exercise have been found to have a better ability to control their blood glucose levels. Some diabetics who require insulin injections, however, can develop very low blood glucose levels during exercise, possibly leading to coma, if they do not carefully balance their lifestyle habits. Diabetics should consult with their physicians before starting an exercise program.

Cancer. A few recent studies suggest that bowel and breast cancer, two of the most common killers among cancer, are less likely to develop in active people. One reason might be that food passes more quickly through the intestinal tract of an active person. However, more research is needed to explore this exciting benefit of regular exercise.

Immune system. Previous research suggests that moderate exercise, like brisk walking, may promote a better functioning of the immune system, while excessive exercise, like marathon running, may depress it. In a study I conducted on 2,300 Los Angeles Marathon runners, flus and colds increased 600 percent in the runners who ran the marathon as opposed those who decided not to.

Reproduction. Does regular exercise increase the sex drive? There is no evidence to support this common claim. In fact, some evidence suggests that excessive exercise may actually have the opposite effect.

Although researchers have found that the health of pregnant women improves with moderate exercise during pregnancy, there is no support for the belief that the baby will be healthier. Instead, pregnant women who exercise too much may actually interfere with the normal development of the growing fetus.

Environment. Exercising in heat and humidity can be very dangerous, leading to heat exhaustion and even death from heat stroke. Although studies show that we can adapt somewhat to exertion in the heat, it’s best to avoid exercising heavily when the air temperature and humidity are high. Air pollution, especially ozone, is another environmental problem that has been associated with a temporary decrease in proper breathing.

Aging. The life-span is defined as the number of years one is genetically endowed to live. Life expectancy is the number of years one is expected to live at birth, which is related to both genetic and lifestyle factors. Although there is no evidence that exercise will lengthen the life-span, many studies show that active people can expect to live two or more years longer than their peers, due to a lower risk of death from heart disease and other causes. Perhaps even more important, is the fact that an active elderly individual can possess the exercise capacity of a person 20 to 40 years younger, improving the quality of life in their remaining years.